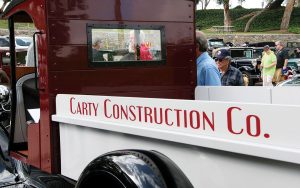 Carty General Contracting is a long-standing business organization whose humble beginnings can be traced back to the City of Whittier in which it still continues operations to this day.

Our founder, Whittier native Don Carty, has always had a very focused interest in what can be called the industrial arts and while he naturally thrived within these areas throughout his early years, Don’s interest and skill was not cultivated by him alone. In fact, some might say that construction and working in the construction industry is more of a familial tradition for the Carty’s as both his father and grandfather were equally skilled tradesman who, as one may imagine, helped to influence and shape Don’s interest and skills with each passing year.

After graduation from Whittier High School, Don chose to continue his education at Rio Hondo College in pursuit of a degree in Industrial Design. Don completed his studies at Rio Hondo College and was awarded an Associates of Arts Degree. Following what would be considered common logic, Don decided he wanted to further his education and obtain a Bachelor’s Degree from California State University Long Beach, but this, it turns out, was not what fate had in mind and just as simple as that, Don decided he had experienced enough of what formal education could offer and struck out on his own.

In the late 1970’s, Don, along with a business partner, started a small company named Repairs Unlimited. During this pre-digital age, most small businesses would acquire work by word of mouth as opposed to the extremely expensive advertising campaigns the larger organizations would rely on to generate income and Repair’s Unlimited was no different. During this time, and through the quality of work the company was producing combined with the speed at which word of mouth travels, Repairs Unlimited had a fairly continuous flow of projects within a relatively short period of time, but this would be, it would seem, just the starting point.

Through the course of his work with Repair’s Unlimited, Don began to notice a trend developing within their customers. To be more specific, it was observed that in more and more cases, customers would request for Don and his partner to complete additional side projects outside of the course of their originally planned work. These weren’t necessarily large projects or projects that would take an exorbitant amount of time, but none-the-less, they were still additional aspects of work Don and his partner were being asked to complete. As a result, Don realized that perhaps he could extend the reach of the business by simply expanding the services his company offered and this is exactly what he did.

Since 1981, Don has remained extremely active within the company, but now, and in keeping with what could be considered a Carty family tradition, the managing of daily operations has been passed over to his son CJ who still maintains the very principles and standards originally established by his father all of those years ago. At this point and under the guidance of both Don and CJ, we have worked and expanded our operations to outside of the Whittier area while ensuring compliance to the same attention to detail and standards with which the company was originally formed. To date, we have completed over 1000 projects to include various aspects of residential construction, commercial construction initiatives, and community improvement projects around both the Los Angeles and Orange County areas.

With all of that being said; we told you our story, how can we be a part of yours?